Ok, so #30on30 has got to be over a week old already. But the weeks event will never be old to me because, duh, it was my big 3-O; the dinners and surprises. And the biggest surprise of them all – the proposal! On my 30th, literally, my 30th, you know, my 30th being on 30th September? Ok, I think I’ve mentioned this on a previous post, but yeah. Lets just cut right into it, shall we?

Oh, on a side note, Zizi and me came up with #30on30 thinking it would be cute. Later, we learned that there were other #30on30s. Guess many people share the same birthday as Monica Belluci too and we’re turning flirty thirty.

So, on the night before my siblings were due to fly off to Bali for Lisa’s pre-wedding photo shoot, they decided we should have a meat buffet dinner together at Brazil Churrasco. 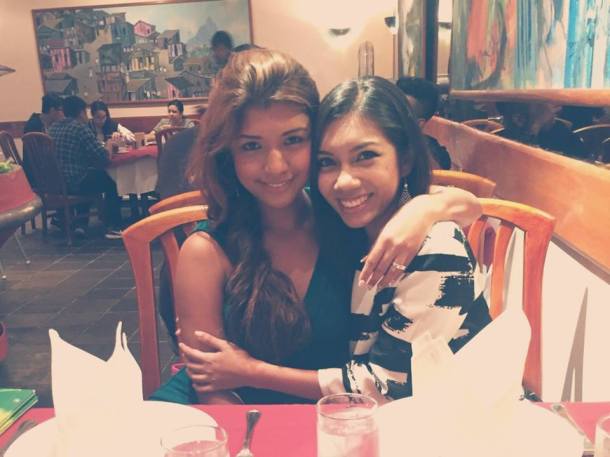 Apparently, Taufik Batisah was sitting at the table behind us. He was covering his face while Adam was taking pics of us. I think he thought we were trying to get him in our picture *rolls eyes. Bitch please, its our birthday, we want our shot in good angle and lighting hello~, why would we want your face in our picture? Didn’t even know he was there under Adam told us and when we saw him covering his face at the background of our photos, wtf.

Anyways, we were more than happy to have the meat cutter guy in our photos. Loved that we was so consistent in serving us and was still happy and smiling even when we rejected some meat brought to us. 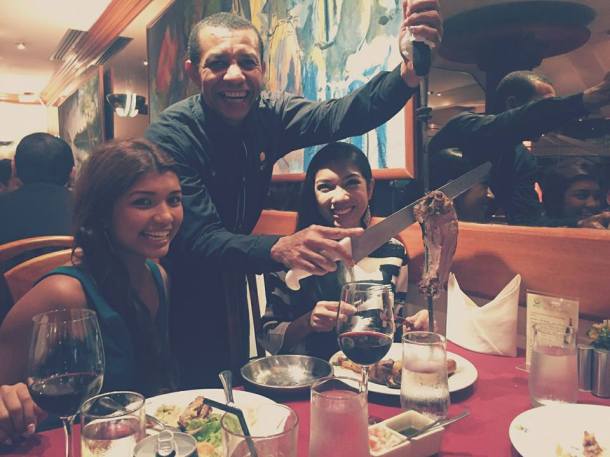 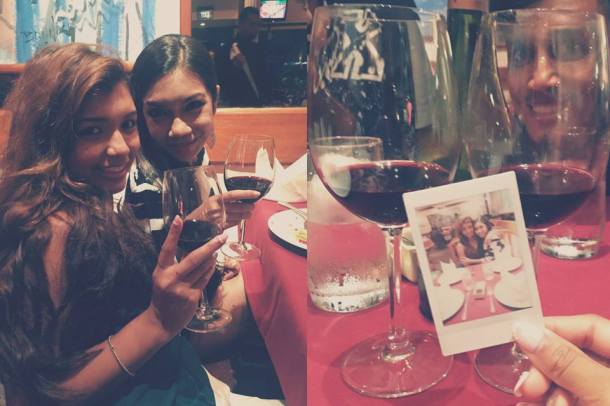 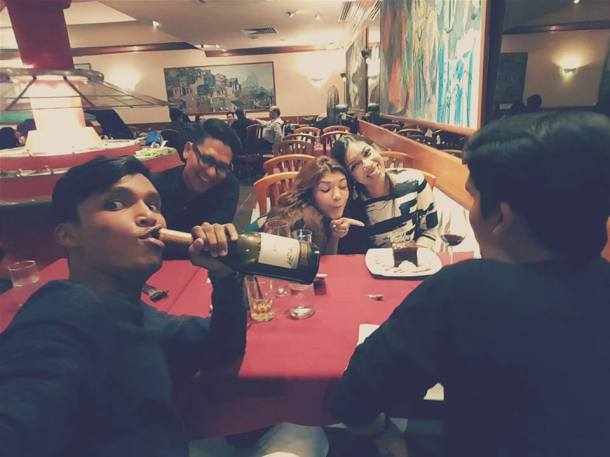 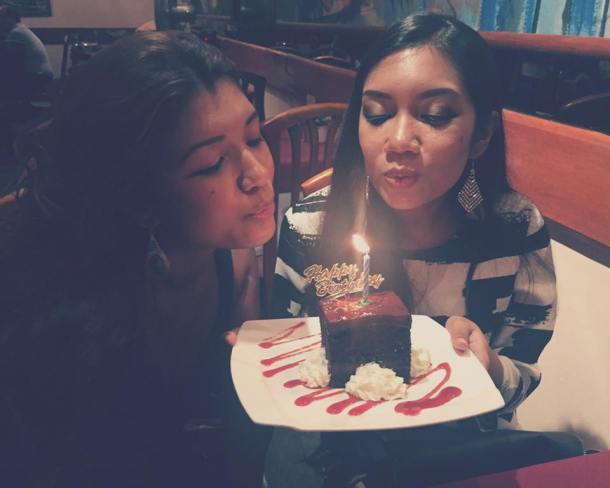 Fun Fact – Jikky and my birthday are three days apart. So we often celebrated our birthdays together as kids and still go out for dinners as big girls now. We had dinner together last year too.

I thought the dinner was the highlight. Turned out, the cake with candle and birthday song came as a surprise. Jik and I made our wish and blew the candle together. I honestly make the same wish every year because there are just some things that no money can buy. I love you Jikky, Shammie, Sukri and Adam, thank you for such a lovely and annoying (as usual) dinner, playing with fallen meat and talking rubbish as usual.

30th September fell on a weekday so I really wasn’t expecting much out of it; probably dinner with the usual bunch at JEM or Bikini Bar maybe even in my slacky girl outfit complete with glasses. So I was quite excited when they decided on a different location – OverEasy at One Fullerton. Haze or no haze, my 30th Birthday still went on! I asked Shine again if he was able to make it after work but he said he had a meeting and that we’ll celebrate together on the weekend and to have fun with my friends. It sounded so genuine and I believed him.

So imagine my surprise when he turned up at OverEasy with a bouquet of roses. I was surprised and my immediate reaction was to ask “Why you bluff me?”. Lol. It was his first time buying flowers so it was really special; the bouquet even had little hearts, lol (he’s trying to be romantic). I was quite obsessed with the bouquet, I was holding it through dinner until I realise it was getting in the way of my food. 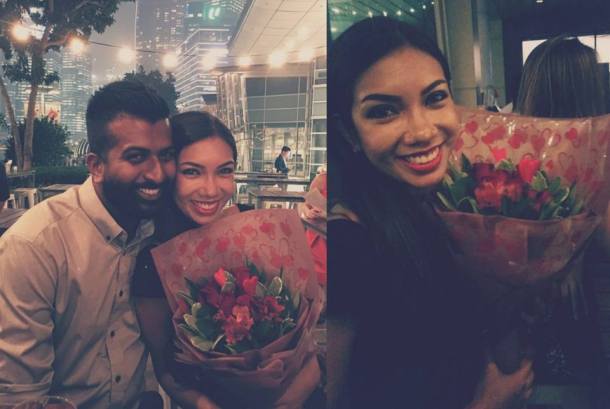 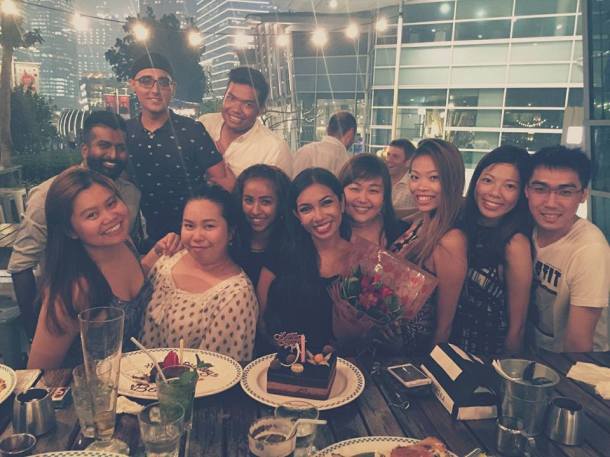 After dinner, they decided to take group photos since its been awhile since almost the whole Fort team came together. How special since these people and myself have gone way back together and my Fort Siloso days will always hold a special place in my heart. So having them there on my 30th was very significant.

While we were taking photos, suddenly the group decided to take a solo with me and Shine. Gups wanted to be in the pic too and the whole group were like, “NO, GET OUT LA!” and I was like, “Why? Never mind, let Gups take with us, its okay” and they were like, “NO! GET OUT NOW!” very sternly, lol. Gups, you asshole, now I know you were messing with them. They took out their iPhones and were preparing to take pics of Shine and me but Shine was busy tying his shoelace or something. So I was just smiling into the camera waiting for him to get up and join me. Then they shouted “Watie, turn around!”. Why is he taking so long to tie his shoelace? My friends must be getting tired waiting for him to get up. So I turned and asked him what he was doing. And he just kneeled there and said he’s knees hurt, that he has never done anything like this and that I mean the world to him. Huh? Why can’t he tell me this some other time? And then he took out a box. Oh! I immediately got it! LOL! And I said, “I know what you’re going to do!” to which he replied, “You are so annoying”. I think he chuckled under his breath. And I was just grinning anticipating the ‘moment’. That moment happened when he opened the box and I heard the loudest gasp in my life, either from me or because the whole gang gasped too. 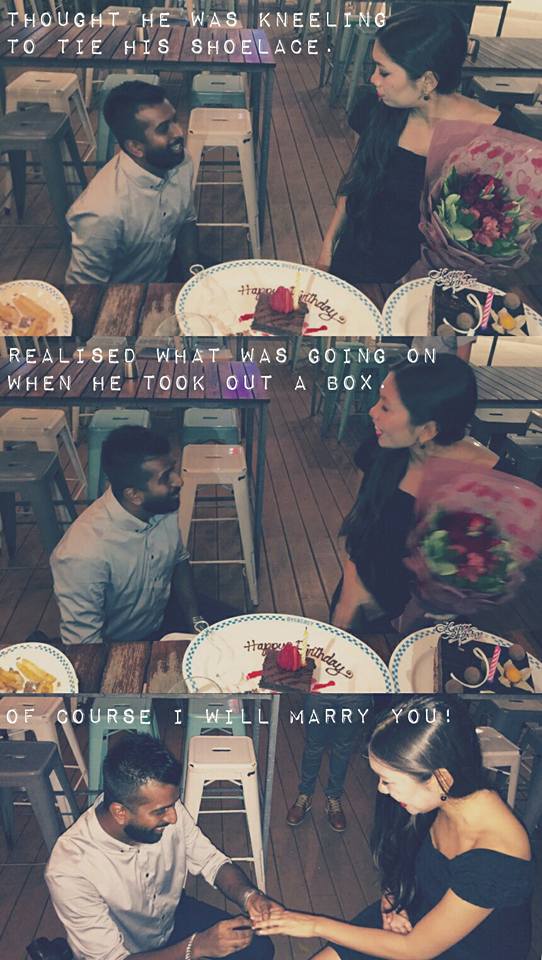 More story about the ring and proposal here.

Thank you to all of you for coming to witness the moment, Nasri, Gupu, Sulastri, Anissa, Shiwei, Astra (and Sean) and Lay Peng. Thank you Zizi for planning this with Shine, it means so much to me that two of my favourite people have put this together. Gupu, thank you for remembering I’ve wanted to eat at OverEasy One Fullerton some five years ago but never did. I don’t know if it was a random pick but something tells me you remember *smiles. Sneaky Gups. Of all, I’m happiest when I see Shine and the gang get along so well. It makes me feel so grateful, like my life came to a full circle and worked out. It means the world to me, these people are my second family, people who have seen me struggle in the past and Shine is my happiness, my future. Where did I find such awesome people to fill my life?

Shine posted a shout out with the caption ‘She said Yes!’ on Facebook with immediate effect! Both of us did not expect the outpour of congratulation that came our way, the messages were heartfelt and the response was overwhelming, thank you to all our family and friends for the love and support. 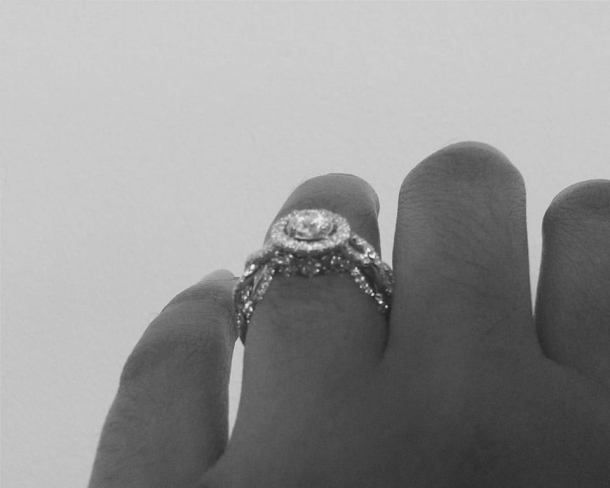 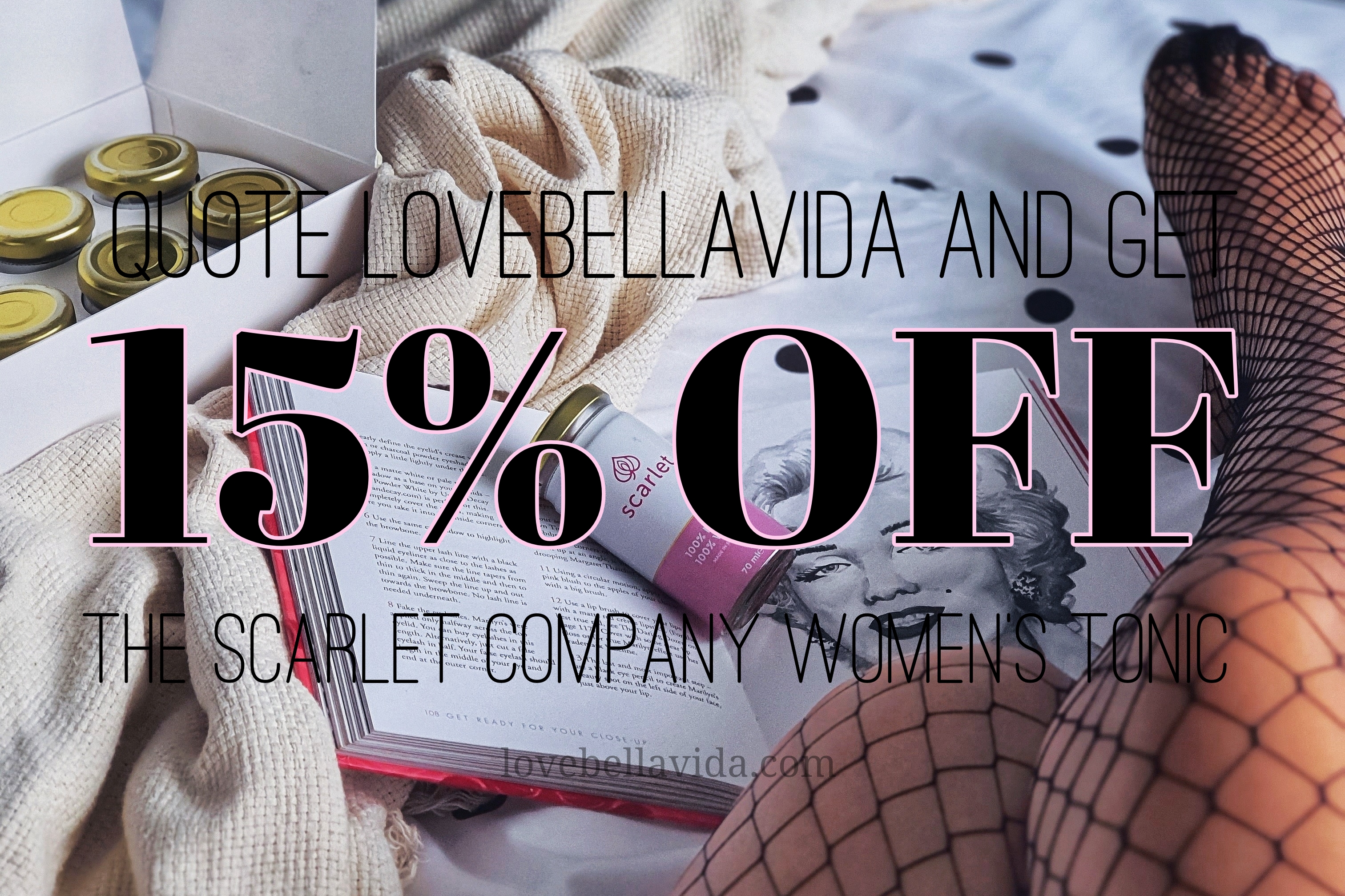 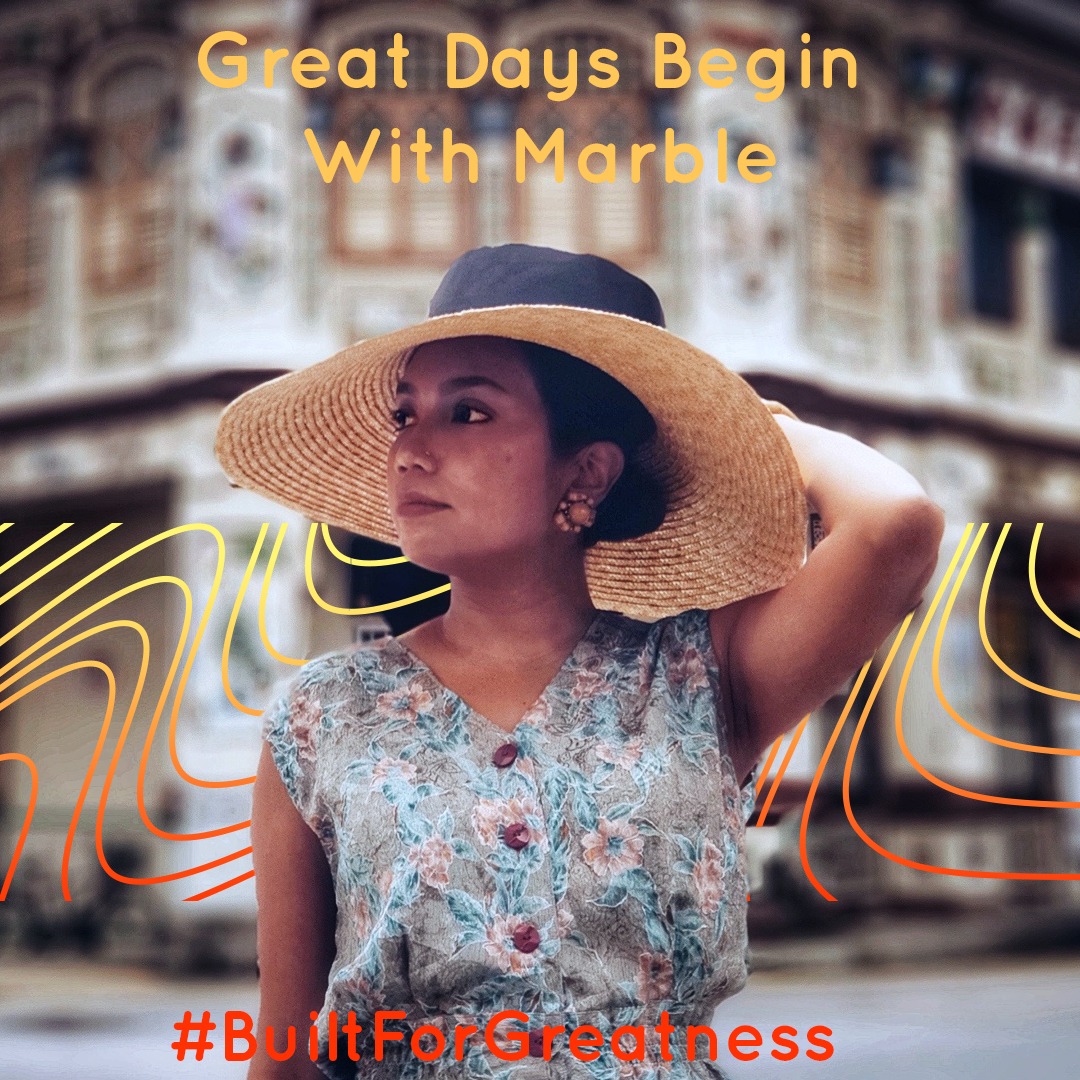 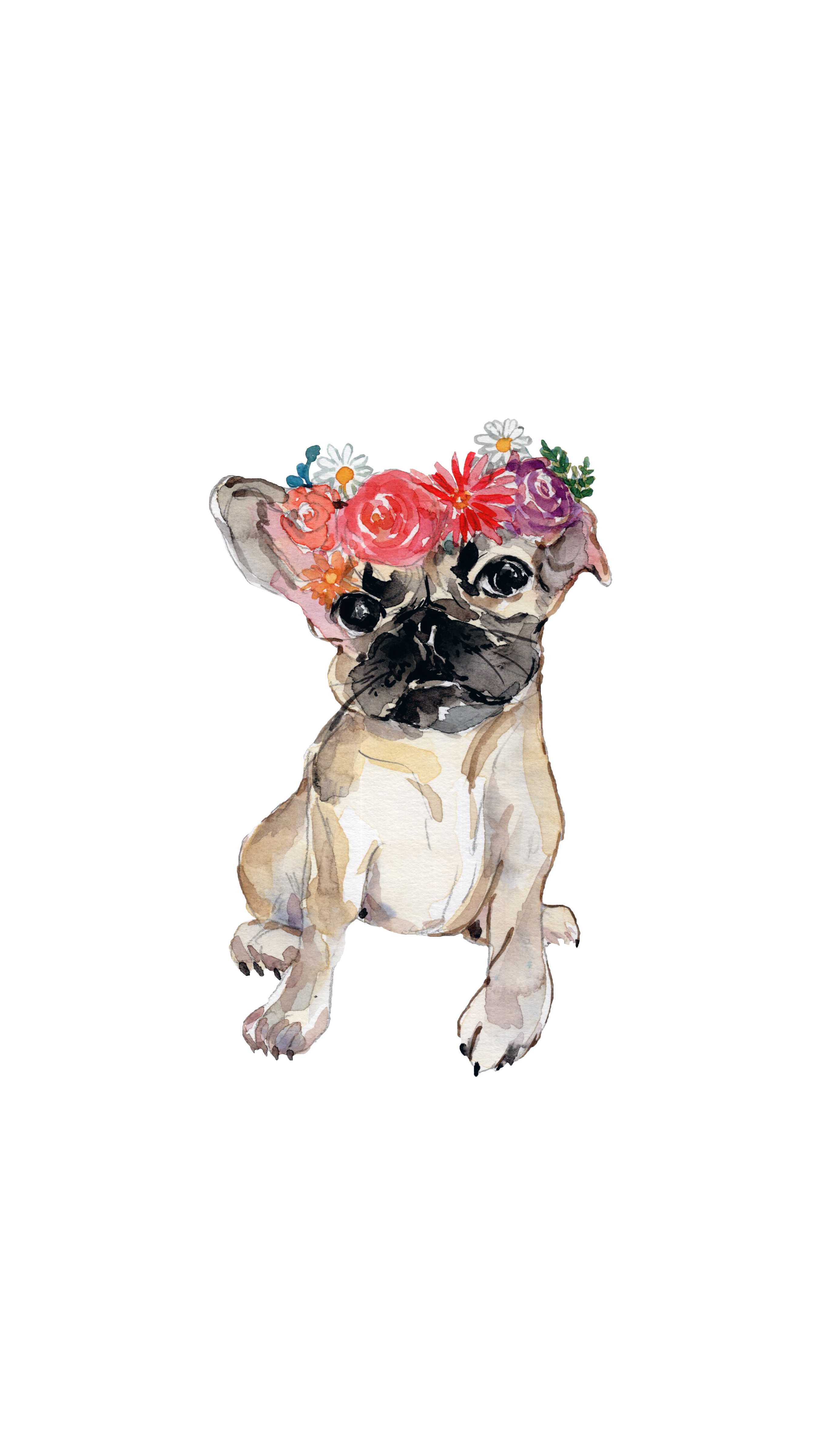